Heritage Park is a neighborhood, but it’s also a community based around a grouping of apartment buildings and townhomes. The area sits just north of downtown Minneapolis, but it’s tucked behind a knot of highways that make it feel cloistered. At least as far as food goes, this isolated feeling is warranted. Heritage Park is a federally designated food desert. But it’s a packed neighborhood, too, and the area is home to 700 kids who need ways to stay busy and healthy after school and over the summer. Elana Dahlberg, the adviser for Green Garden Bakery and a project manager for the nonprofit Urban Strategies, explains that healthy food access is a particularly hard challenge in the summer. For a lot of kids, she says, dinner means snacks from the vending machines.

So Heritage Park began offering cooking classes as a part of their youth programming. The kids met in a community room and kitchen attached to the main leasing office, and they often practiced their cooking skills with ingredients grown in nearby community gardens. These classes offered one solution to the problem of healthy foods access, but it also increased awareness and excitement about healthy cooking, too

That excitement grew. Soon, the youth created their first signature dessert: the green tomato cake, which Dahlberg says set the tone and values for their bakery. They sold this dessert for the first time in 2014, before they were officially a business. At the time, they were just kids having a bake sale for a friend in need of support after an accident. Still, from the start, they had a clear vision of what they valued–they wanted to be green in multiple ways. The youth decided it was important that they not only sell healthy desserts, but that they do it in an eco-conscious manner, packaging their treats in compostable packaging decorated with plant-based inks.

Today, they continue to run their business with a strong sense of community-oriented values. GGB uses a third of their profits to pay the staff, a third to invest in their business, and devotes the final third to donating back to their community.

Since their first sale, they’ve added a variety of vegetable-based desserts that incorporate vegetables in fun, creative ways that motivate youth to try new, healthy foods. GGB now serves beet brownies, jalapeno chocolate chip cookies, carrot pumpkin cakes, lavender-blueberry scones, and other youth-inspired creations. In blending gardening, baking, eco-consciousness, leadership, and empowerment, GGB has grown into a successful business that prioritizes engaging more youth as they grow. There are currently 150 youth involved; some are just in kindergarten and they help decorate the compostable packaging that houses the desserts made by older youth.

In their meeting room, the brightly colored packaging is stacked all around to dry on tables. As it is, this area is useful for cooking classes and personal development for the younger kids involved. But they lack a commercial kitchen in their community. For the older ones who bake the treats they sell, the youth must  take a 45 minute bus ride to South Minneapolis to bake in a full commercial kitchen. This impacts the older kids the most, and it has been limiting their capacity to expand.

Limitation has never stopped these young leaders. They received an anonymous gift of $150,000 toward a commercial kitchen which was capped with a gift of $50,000 from the Sundance Foundation. The Green Garden Bakery team has crowdfunded over $17,000, which they will use to buy kitchen appliances and mobile bike carts to help them get around town to make deliveries and to support pop-up sales at events.

The Green Garden Bakery leadership team–all made up of teens connected to the Heritage Park neighborhood–has now met with architects, bidded with contractors, and have submitted plans to the city for approval. They plan to have a finished kitchen by the end of the year. Once the kitchen is complete, they intend to open it up to adults in the community who are interested in starting their own catering or cooking businesses. 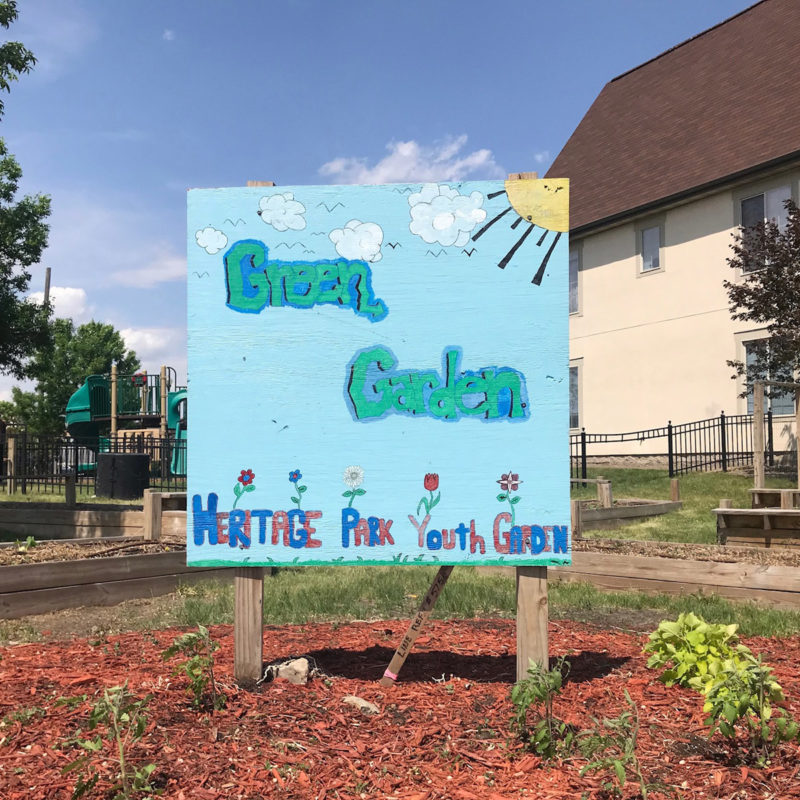 As Dahlberg sees it, the success of Green Garden Bakery has to do with the youth taking the lead. “There is no blueprint for what they’re doing,” she says, and their projects, “aren’t developed by adults for kids but instead for kids, by kids.” Beyond the renovation, they’re taking the lead on a variety of other projects, too. The new kitchen will give them more space to freeze ingredients for the winter, but they’re also planning high tunnels and an eventual greenhouse to extend their growing season. They plan to get a passenger van to make transportation easier. On the more distant horizon, the Light Rail will come through the neighborhood by 2021, and the team hopes to have an established storefront by then. Until then, there is plenty to be excited about.  The team is in talks with the culinary director for Minneapolis Public Schools about the possibility of serving their desserts in school lunches.

But at the core of all this excitement and innovation is a commitment to community. As Dahlberg explains, the team works together like a family, seeing each other through hardships of all kinds. The donation from Sundance Family Foundation, then, means a lot to the team, especially because it was made in honor of founder Nancy Jacobs’ mother, Helen. As a way of thanking Sundance Family Foundation, the Green Garden Bakery team created the lemon lavender blueberry scone in commemoration. With their brand new kitchen, Green Garden Bakery surely has many delicious, community-supporting desserts in their future.