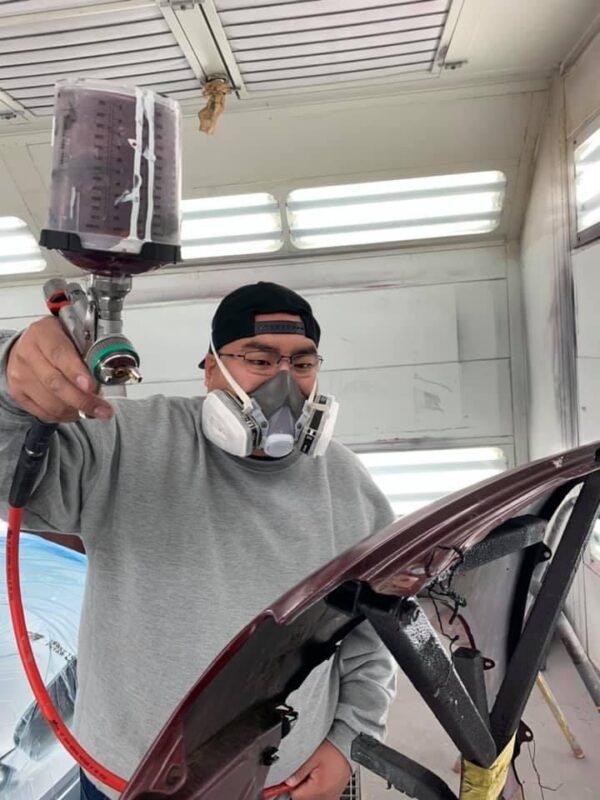 Chuck Yang is a Minnesota native and an Autobody Technician at Caliber Collision Fleet. At 25, Chuck has found a successful career path with help from his wife, son, and Newgate School. While in high school, Chuck wanted to be a mechanic, however, his dad didn’t want him to do that. Chuck’s parents later moved to California for their retirement and Chuck found himself lacking a major support network when they did. Chuck bounced around in a few different jobs before deciding to leave his job in medical assembly to attend Newgate School for their Auto Body Training program. While in school, Chuck’s wife told him to focus on school and let her do the rest, providing Chuck with the time to hunker down and soak up as much as he could from the program.

Chuck graduated from Newgate in February of 2021, in the midst of Covid-19, and found his current job with Caliber. All new employees at Caliber begin by focusing on detailing work and are required to go through Caliber’s training program to advance to technician work. Unfortunately, the training has a long waitlist from employees and Chuck found himself unchallenged by detailing cars as he waited to enter the program. That’s when his boss Theresa stepped in. Knowing that Chuck had gone through Newgate, Theresa went outside of the chain of command and brought the issue up with a VP at the company. As soon as the VP learned Chuck had gone through Newgate he waived the training requirement and just like that Chuck got to work in a technician role where he is now. Chuck continues to both work as an accomplished mechanic and continue to learn daily in his new role. Chuck will work his way from being a Tech C to the highest rank, Tech A as he becomes more skilled at taking on more complicated repair jobs.

While still relatively new in the role, Chuck loves his job. He enjoys the hustle and learning new things every day. He comes into work every day knowing that he is an essential part of his team, and that without him they would not hit their monthly targets. When they do hit those targets, the team has a barbeque thrown to recognize their hard work.

For Chuck, getting to where he is now wouldn’t have been possible without the support Newgate School and the motivation he receives from his wife and the inspiration from his 1-year old son, Carson. Chuck still regularly keeps in touch with his teachers from Newgate, both to check in and to continue to learning from them. He even leaves work early to go speak with Newgate’s current students when he can. Newgate gave Chuck the know-how while his supporting wife and adorable baby keep him chugging along. Chuck is excited to buy a family car and soon a new house.

For those looking for Earn & Learn career tracks, Chuck’s advice is to take the work seriously, get organized, and find friends or family who will motivate you to push further. While at Newgate Chuck made three friends and together the four of them would have friendly competitions to see who could get the most done in a day. Their friendship made the work fun and pushed each of them to work harder than they would have otherwise. We can’t wait to see Chuck and his family continue to achieve their personal goals as Chuck earns and learns his way to becoming a Tech A!