Cole Stevens, age 19, is the co-founder and co-director of the new 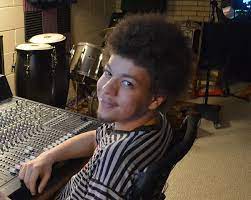 youth leading change non-profit Bridgemakers. Cole’s story started with the Covid-19 pandemic, which happened to be during his senior year of high school. Cole held a job at a café but was laid off due to Covid, losing all of his income. His dad’s income was also hit hard, along with their family’s financial stability. Cole applied for Unemployment Insurance (UI) and was awarded the payments which were then used to pay rent, put food on the table, and generally survive. However, there was a problem. As a high school student Cole was, by law, prevented from receiving UI benefits. So, with two months of high school to go, Cole received a letter from the state of MN requesting the UI payments be returned. Suddenly, Cole felt incentivized to drop out of high school with only weeks to go in order for his family to keep the UI benefits. Instead, he found an alternative path that led to youth agency and empowerment. Cole began searching for a lawyer, and along the way met Walter Cortina, Youthprise, a nonprofit which invests holistically in underrepresented youth, and mentor Jon Bacal, Founder of Minneapolis’s Venture Academy and Hiawatha Leadership Academy. Together, they worked with the Don’t Forget Us Coalition and worked to sue the state of Minnesota over it’s UI laws. By the end of the fight, their coalition won $70 million in UI benefits for laid off students and changed the law to allow future high school students to also be eligible for UI benefits.

After winning the lawsuit Cole and Walter felt as if they were just getting started. With the help of Youthprise, and continued mentorship from Jon, the two of them founded Bridgemakers: Youth Leading Change. Bridgemakers is a nonprofit run entirely by youth, working to be a catalyst for youth leadership as well as fostering support for young artists and entrepreneurs in the Twin Cities. The Bridgemakers are running a fellowship program which pays youth to earn skills in their specific crafts and in leadership skills such as public speaking. They put on events, bringing local artists, musicians, and speakers into the community. Bridgemakers is also launching Changemakers, a school initiative for youth to organize and train students to advocate for themselves both within their schools and with their elected officials. Cole’s hope is to combine storytelling with technology to build advocacy skills and marketable experiences for youth to become community leaders and also build wealth for themselves.

You might think that creating a non-profit at 19 would keep Cole busy enough, but you would be wrong. In his spare time Cole is also an artist playing multiple instruments, including guitar, piano, bass, saxophone, and the drums; and he is now planning on learning carpentry. Cole loves to learn. In his words, he’s “hungry”. And his advice to other youth is for them to be hungry as well and show the world that they are eager to learn, become leaders and participate in community. For Cole, this means demonstrating curiosity and constantly seeking out new opportunities. It means making a name for yourself, and demonstrating to people that you want to get their foot in the door and that you want to learn more than you knew yesterday. Cole recommends going online to find out if there are groups nearby doing work you’re interested in, talking to your teachers, walking your city and popping into stores that interest you. And from Cole’s experience, when you pursue paths like that you will quickly find yourself with the problem of needing to say no to opportunities instead of not having opportunities.

Check out Cole and Bridgemakers at bridgemakersmn.org