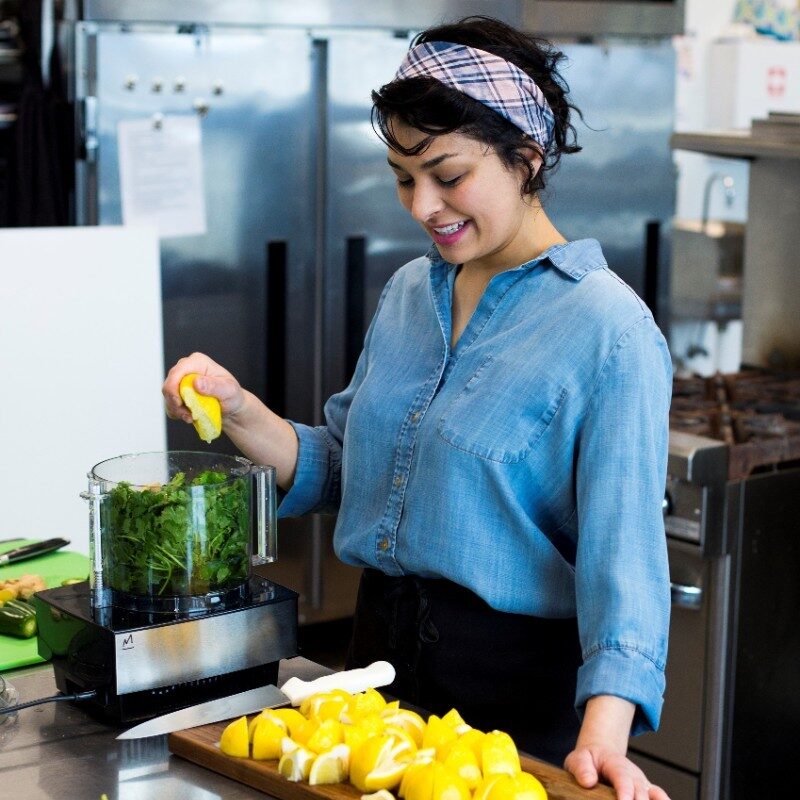 It all started in 2014 when Fatima added ginger to her cilantro chutney recipe, a delicious change to a chutney the sisters had eaten their whole lives.

For the Sajady family, food is a focal point of every get together. With 55 cousins and counting, family events are frequent, large, and always involve a great meal. Along with food, the Sajady family is full of entrepreneurs. Yasameen’s parents immigrated to the United States from Afghanistan in the 1970’s. Yasameen’s father became a mechanic and his wife, Fatima, went on to get her CPA license to become an accountant. Together, the two of them successfully run a car mechanic shop and a used car lot. Along with her parents, Yasameen remarked that her grandpa, along with many uncles, aunts, and cousins all also have their own businesses or at least a side hustle on the weekends. So, it was no surprise to Yasameen that she also had a flair for entrepreneurship. Having grown up at her parent’s business Yasameen helped by washing cars, mowing grass, and cleaning the windows.

After graduating from Augsburg University Yasameen managed youth programs at Pillsbury United Communities, and then joined the Sundance Family Foundation. While with Sundance, Maazah was in its early stages as a weekend project for the Sajady sisters. Yasameen and her sister Sheilla always knew they wanted to do something with food together, and once their mother tinkered with her chutney recipe it took less than a week for them to create a name and register the business. Maazah started by making small batches to be shared with friends and family on the weekends and grew to be sold at Farmer’s Markets. As the business grew and viability Yasameen decided it was time to leave Sundance and focus on her family’s new business where she is now the CEO and the single full-time employee.

As Yasameen shifted her energy to growing Maazah beyond a side business, she found herself lacking mentors outside of the local farmers market circuit. Yasameen hoped to learn how to expand her business and sought mentors who were a few steps ahead of Maazah. Yasameen found what she was looking for by returning to Augsburg to earn her MBA and through Lunar Startups, a business incubator focusing on BIPOC, LGBTQ+, women, and non-binary entrepreneurs. Lunar Startups proved to be a tremendous resource to Yasameen, connecting her with a large network of mentors, banks, accountants, and experts to help her grow her business. Yasameen was exposed to other industries through her cohort as well, helping her think outside the box while also building the foundation of her business to make sure it was ready for the next stages of growth. And best of all about Lunar? Once you’re in, you’re in! Yasameen continues to be a part of Lunar communication channels, receiving opportunities and continued mentorship. Lunar Startups provided Yasameen with mentors who were truly invested in her success.

For Yasameen, the fun is in being able to spend time with her family as they make delicious food and share their culture with a broader audience. Yasameen gets to see her sisters not just as family, but also as businesswomen. She loves getting to interact with her sisters as a scientist and a creative mind, sides of her two sisters she had never seen up close. Now the family is a dynamic team, with each sister and their mother playing a key role in bringing a successful product to market.

Maazah has been successful in growing steadily since its inception. The brand has grown from 25 jars of chutney being bottled at a time for friends and family to a national scale. For Yasameen, the name of the game is to find the right kind of partnerships, people with the right values who appreciate what they are trying to do with Maazah. After all, Yasameen notes, it’s hard to sell chutney in the Midwest! For the Sajady sisters, Maazah is an opportunity to share their love of food and their culture with an audience, many of whom have never been exposed to Afghani cuisine. As long as Yasameen continues to enjoy running her business along with her family she is enthusiastic to keep sharing their delicious chutney with the world.