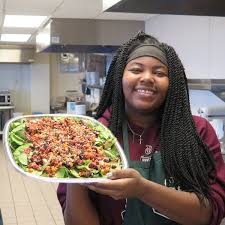 Zarea Mobley is the Administrative Assistant and a Market Garden Alumni at Urban Roots in St. Paul, MN. Zarea has lived in St. Paul since she was 6 years old and grew up seeing Urban Roots’ presence around her  community. The summer heading into her Freshman year of high school, Zarea joined Right Track to find a job. She went through their trainings and attended job fairs, then applied to a handful of positions. Zarea was disappointed to only receive a few offers but accepted a position with Urban Roots on their Market Garden team. Starting in the Seed Crew, Zarea spent the summer growing seedlings. After her first summer Zarea was unimpressed with gardening but decided to join Urban Roots again for a second summer on their Grow Crew growing those seedlings into produce-yielding crops. During her second year, Zarea’s love for gardening blossomed. Previously she had thought gardening to be easy, but Urban Roots quickly taught her how much there is to know. Every plant is different and requires a different approach. But over time Zarea gained expertise and built up her confidence. In her third year she joined the Harvest Star Crew, the top tier on the Market Garden Team. As a Harvest Star member, Zarea got to put all of her expertise to use, mentoring other Market Garden youth. Zarea is now entering her 6th year with Urban Roots and when she’s not in the gardens during the summer has a permanent position as Administrative Assistant to Executive Director, Hayley Ball.

Urban Roots provides Zarea with the flexibility to work full-time in the summer and part-time through the school year as she studies Psychology at Augsburg University. While Zarea has a full plate as a student and employee, her Urban Roots family provides endless support and guidance for her. Zarea has supporters throughout Urban Roots who go above and beyond as mentors. Jaclyne Jandro, the Market Garden Manager is always there for Zarea, providing help with school, her personal life, and work. Recently, Zarea was thinking about dropping out of her program at Augsburg. When she told her managers at Urban Roots they quickly called a staff meeting and sat down with Zarea to workshop all of her options and how she could budget for school. Zarea is continuing to stick with her program and is more confident knowing she has such a strong team behind her.

Zarea’s future goals are still uncertain, but a few things are clear for her. She knows she wants to continue on with Urban Roots, at least through college, working to grow the organization further and inspire others to adopt similar urban farming models for their own communities. She also knows she would like to move somewhere warm, and as a life-long Minnesotan she has earned it. And importantly, Zarea has learned that her hard work has paid off for her. During her childhood, Zarea often didn’t think she would have opportunities for success. But her mother taught her determination and a “finish what you started” attitude. The combination of Zarea’s own determination and hard work along with mentorship and support systems from Avid mentors in high school, Right Track, and Urban Roots have increased Zarea’s confidence and taught her she is powerful. She closed with a statement to other youth that “you are powerful, too. Our communities need more young people to harness that power and make the changes they want to see in their communities”.